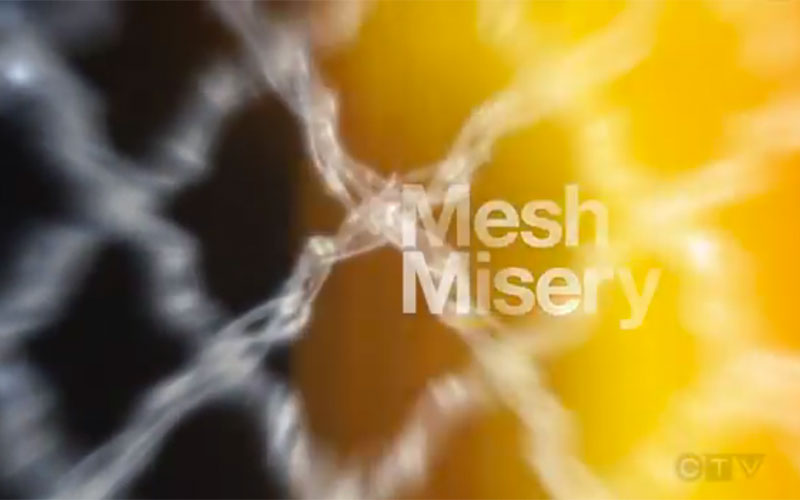 Surgical Mesh – the plastic mesh that’s surgically inserted to support pelvic organs in cases of prolapse or incontinence, was the topic of a CTV W5 episode investigated by their medical specialist Avis Favaro.  In the 20 minute segment (Sept 2017), Ms. Favaro talks with patients, surgeons, and pathologists who are familiar with the mesh, examining whether it’s a safe solution to resolve the problem.

From the W5 episode: surgical mesh has been around since the 1960s, but in the early 2000’s companies started marketing mesh devices as a faster and easier way to solve two female gynecological problems:

The intent is that the mesh will hold the organs in place, alleviating the problem.  It is inserted through small incisions inside the vagina and then weaved into the pelvis where body tissue quickly grows into the pores of the mesh. It can be inserted within an hour, usually with minimal training, and it’s easier than the traditional surgery that takes hours and comes with a long recovery time.

Mesh makers such as Ethicon, a subsidiary of Johnson & Johnson, and Bard Inc., which makes a hernia mesh, stand by their products as a safe solution for the vast majority of patients.  However, around the world female pelvic mesh is being slammed with questions about safety and reports of complication rates between 2-15%.

In 2008 the US Food and Drug Administration issued a public health notification that pelvic mesh was linked with rare but serious complications. Two years later (2010) health Canada also issued a warning – that the mesh could move; it could erode into the bladder or vagina, causing chronic pain and infection, and that doctors must inform patients of these possible adverse events.

Ms. Favaro spoke with Chrissy Brajcic, a Canadian woman who had the implant and suffered severe complications ever since, even after the implant was removed.  She had the mesh inserted after the Health Canada warning but wasn’t aware of potential adverse side effects.  After the insertion, Ms. Brajcic immediately started having complications, but getting the device removed wasn’t as easy as getting it inserted.  In fact it’s difficult for many patients to find a doctor that will remove the mesh once inserted; some Canadians travel across the country for the removal procedure. Ms. Brajcic was part of a class action lawsuit against Johnson and Johnson along with thousands of Canadian women taking legal action claiming they were injured by mesh.  After losing her mobility and fighting infection after infection, Ms. Brajcic tragically passed away in November 2017.

Despite law suits and controversies, mesh is the standard of treatment for pelvic repair and hernias once all the benefits and risks are weighted versus other solutions. Some doctors, such as women’s health specialist Dr. Colleen McDermott, say the mesh is a godsend for most women and extreme cases of complications may be due to lack of training on the surgical procedure.  Some doctors take long-weekend seminars to train on the surgery, compared to her multi-year training in female pelvic disorders. She says she would have the mesh implanted if she needed it.  She implants mesh and removes it when there’s a problem, but says the media doesn’t cover the success stories.

As a person living with stress incontinence or prolapse, what does one do with all of this information? If all other options have been exhausted, pelvic mesh may feel like the right solution, with the benefits potentially outweighing risks.  The Canadian Medical community hold that view, as it’s still the recommended surgical option for stress incontinence or prolapse. However, despite being a quick procedure, it’s a life-changing surgery and lots, LOTS of questions should be asked before going ahead.  The unknown is whether this life changing procedure will make things better or worse, and that’s a question worth exploring before hitting the operating table.

Have you gone ahead with pelvic mesh? Would you recommend it?  Let us know!

At the Urinary Gynecologist – True Confessions