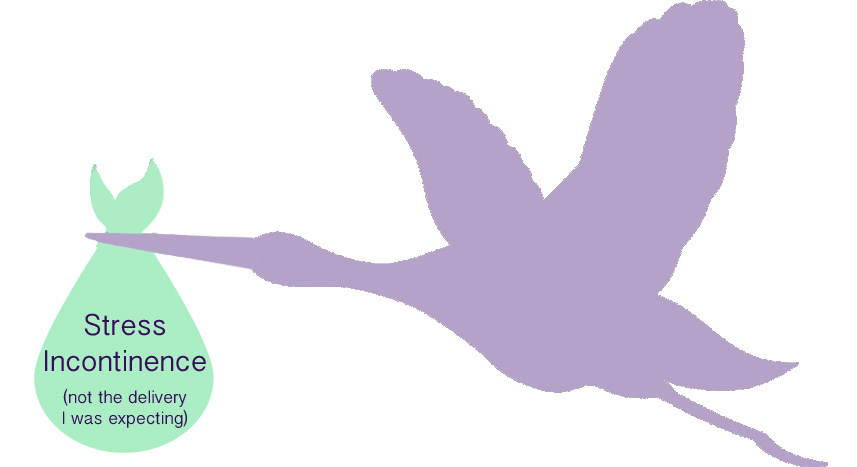 Surprise! Stress Incontinence After Having a Baby

Stress Incontinence, or accidentally leaking pee (urine), often appears as an unwelcome surprise during pregnancy or following childbirth. The constant load bearing of pregnancy or the trauma of delivery may adversely affect the pelvic (or core) system, and unintentional leaking may result. And just like those extra few pounds or the stretchmarks that won’t disappear, women often feel like we have to live with it as a consequence of having had children.

It’s easy to understand why we might think of stress incontinence as one of the natural results of childbirth that we just have to put up with, even if most of us didn’t know pregnancy could lead to this issue. Post delivery, there are lots of surprises that are almost impossible to prepare for, especially for first-time mothers; huge hormone fluctuations, milk production, bleeding, weight loss, and lots of tears (from exhaustion, frustration, or worry). After baby arrives, stress incontinence is just another leak coming from another part of the body and it feels like a minor nuisance compared to the overwhelming responsibility of literally holding another life in your hands.

Incontinence is Not a Way of Life

As our postnatal bodies heal, we start feeling better and we can forget all about stress incontinence because it’s not an acute issue, ie something we notice all the time. But then we try getting back to exercise, or we catch a cold, or we chase a toddler around the yard and feel that surprise leak.  It doesn’t happen all the time, but it does happen enough to remind us that our bodies didn’t completely bounce back like we had hoped.

“That’s the price you pay for having kids”, right?  Wrong.  Though stress incontinence is a common issue, it isn’t normal and it’s not something you have to live with. There are treatments for stress incontinence, and the condition can get better with the help of professional care.

In most countries, including Canada, post-natal care seems to be an afterthought and women are left to recover on their own.  Recovering from stress incontinence usually doesn’t make the list of new-mom priorities and women end up living with it for years and years. Pelvic health specialists, who help women recover from stress incontinence among other pelvic issues, encourage women to seek treatment sooner rather than later.

If you’re not sure where to start, consider talking to your family doctor – they can refer you to a pelvic health or urinary specialist. Some doctors might be like the masses and suggest that it’s just something to live with after childbirth, so be insistent and ask for a referral.  You know you shouldn’t have to live with it so seeking help is worth the effort. You could also go straight to a physiotherapist, as extended health plans usually cover physio without a doctor’s referral.

The Pelvic System and Kegel Exercises