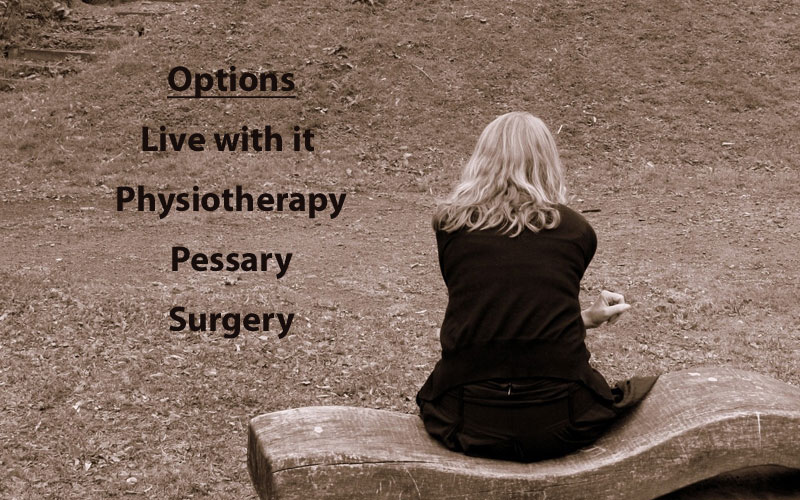 For years, I’d casually mention stress incontinence as a concern during my annual physical exams, usually at the end of the exam when the doctor asks “any questions or health concerns?”.  In general the response was something like ‘oh, yeah, just do your kegels’ or “yes, that’s common, some women insert a tampon before they run and that seems to help”.  Hmm, it felt like the general sentiment was ‘no biggie, just live with it’.  I do kegels now and then but (mistakenly) thought that if I exercised the rest of my body, somehow my pelvic floor would be challenged, engaged, and ultimately fixed.  Years later, I’ve finally decided that I need to give some focused love and attention to this particular part of my body if I have any hope of recovery.

Step 1: Start with family doctor – my new family doc is awesome.  She hasn’t had kids yet so she probably has no idea what it’s really like to be suffering from stress incontinence, but instead of telling me to just live with it, she immediately started thinking about resources for recovery.  In Canada our basic health is covered, so my doctor’s visit is paid for.  However, I’m self employed, so any visits to other professionals, such as physiotherapists, would be coming out of my own pocket (in lieu of extended health coverage that most corporations provide).  So, she started with a gynecologist who specializes is female incontinence.   It’s interesting to note that in places like Australia and France, recovery visits to a physiotherapist after labour and delivery are automatic. Meanwhile in Canada, funding for Women’s health resources is being cut.  Hmm.

Step 2: A visit to the gynecologist.  A quick exam resulted in “yes, I can see exactly why you’re leaking”.  Through our subsequent conversation, I found out that it’s unusual for this doctor (a urinary gynecologist) to see a patient suffering from ONLY stress incontinence – usually it’s other types of incontinence as well.  Reading between the lines, and having seen stats that suggest 1 in 3 women have this condition, my interpretation is that women only go to the doctor when it’s more than stress incontinence, which means most of us are doing exactly what I’ve been doing to combat the issue: nothing.  This isn’t shocking.  Most of us are embarrassed to talk about stress incontinence, even though we’re all likely to know several people who are trying to manage it.

The bad news is that it seems like the situation will get worse as we age.  I’m not looking forward to the hormone fluctuations and whatever else happens as I get older to make it even more difficult for me to laugh, cough, or lift something heavy.

The good news is that the doctor reviewed all of my options with me, from least invasive to most invasive, and suggested that what I do about my condition really depends on what my goals are. The takeaway: this is a fixable problem, and how it gets fixed is up to me.

Least invasive: do nothing – I’ve been walking on this path for far too long, and it hasn’t made the problem go away (though I do my best to ignore it).  Staying on this path will not help me reach my goal of carefree running, coughing or dancing on a whim.

Pelvic floor exercises: working with a physiotherapist who specializes in pelvic floor recovery in the best way to ensure that exercises are being done regularly and correctly. Physio can work for a large percentage of women with stress urinary incontinence.

Pessary: this is a removable device that is inserted into the vagina prior to activities where you know your pelvic floor will be under stress.  For example, it could be inserted before you go on a run or to the weight room.  Pessarys are custom fitted by a pelvic floor specialist such as a urinary gynecologist.  This is something to consider if you’re looking for a temporary solution for planned-ahead occasions of stress, but it doesn’t really help for those unplanned sneezes, coughs, or bursts of giggles.

Most invasive: surgery – the most common method of surgical repair in the area where I live is the pelvic floor mesh.  This is a relatively simple surgery, but it has its complications, especially post-op, and there’s still not a 100% guarantee that the surgery will be successful.

Step 3: For me, I’ve reached the point where doing nothing is more painful than doing something, so I’m going to do something.  I’ve now met with a physiotherapist and have been given an exercise regimen which includes kegels and abdominal exercises.  I’ve set the alarm on my phone to go off twice a day to remind me to do my exercises.  With a plan in place and some new found determination, I’m optimistic that I’ll see some improvement soon.